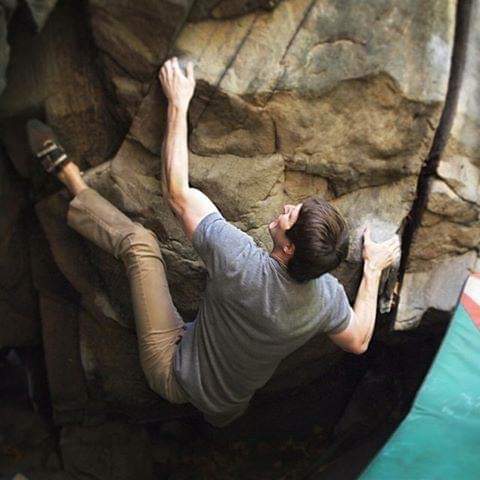 Number of years bouldering in PA

Using one word, how would you describe PA bouldering?

The gritstone is the best for sure. It is bullet hard, the shapes perfect and oh so sticky!

Favorite month to boulder in PA?

I don’t really have a favorite. I think you can find good conditions at any time of the year. PA is huge and the rock and locations so varied. We climb year-round.

Why do you enjoy PA bouldering?What sets it apart from other areas?

I always thought I would move down south at some point in my life but then I realized there is a lifetimes worth of boulder problems right in my backyard. I am proud of the locals and what we have all accomplished. It really is the climbers that set it apart.

I was walking into Hunters with my roommate Nate and we turned the corner past MDSF to see this guy effortlessly climbing up the highball More Pleasure than Pain with his Cordless pad leaning up against the rock 10 feet away from the problem.  After he got down, I struck up a conversation. Admittedly, I was doing most of the talking until the guy asks me if I’m a Capricorn? I am indeed a Capricorn and that was all it took for Bowers to bring me into the State College crew and community at the time. This spawned a decade’s worth of great times, winter trips and 3-5 FAs every day the crew went out in the woods. Community is just that, a group of folks with similar objectives and values.